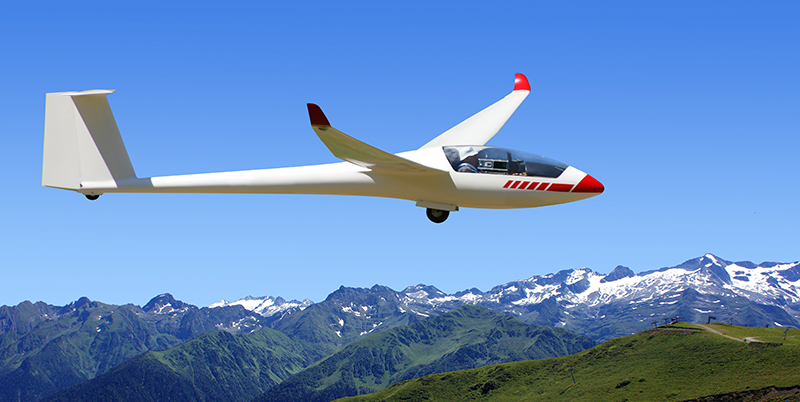 About flying gliders – curious to learn more about the sky and the world of motor-less flight, I added a glider rating back in 1986. As I was already a licensed airplane (power) pilot, I ‘transitioned’ to gliders, as an ‘add on’ rating. It was a relatively easy transition. Without an engine and propeller in front, there is no ‘” P” factor, spiraling slipstream or torque’ (all generated by the turning propeller) to deal with. Just long ailerons that induce plenty of ‘adverse’ yaw, requiring lots of ‘rudder’ to keep the ‘yaw-string’ centered, or coordinated, while maneuvering. The most demanding part of flying the glider, for me initially, was while being towed up to altitude behind a ‘tow plane’, which is really ‘formation flying’. There is a 200’ nylon rope that connects the glider to the tow plane. You have to work really hard to maintain proper ‘formation’ behind the tow plane and avoid the tow plane ‘prop wash’ at the same time. It is a lot of work, especially on a windy day! Either the glider or the tow plane can ‘release’ the glider in the event of a problem during the tow.

If you have a ‘need for speed’, then flying gliders is probably not for you. But, if you can appreciate the skills required as you learn to ‘read the sky’ (and clouds or lack thereof), and know when conditions are good for soaring (not ‘gliding’); can appreciate the challenge of flying a glider solely by learning to manage the ‘energy’ aloft, in terms of lift (rising air) and sink (descending air), as well as knowing the ‘speeds’ to fly, and the challenge of being aloft without an engine, going out and back, safely, without landing, then you might enjoy flying gliders, and soaring! I did.

Generally speaking, glider pilots also make better ‘power pilots’ as a direct result of this greater level of understanding of the sky conditions, that is, smooth air vs. turbulence, (where is the lift and avoid the sink if possible) as well as the required ‘stick and rudder’s skills. If you are interested, here is a link to the SSA (Soaring Society of America), of which I am a member. There are glider ‘ports’ around the country, typically in smaller rural areas away from bigger cities and major urban areas with busy airline hubs and Class Bravo Airspace. Also, because gliders don’t mix well with airplanes in the traffic pattern. You only have one attempt at a landing in a glider. There are no ‘go-arounds’ without an engine! www.ssa.org
And here are links to websites for glider books and manuals.
http://www.bobwander.com
http://www.eglider.org