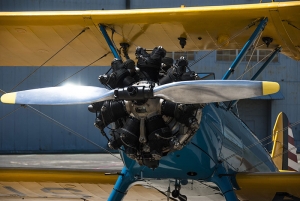 Radial Engines are distinctly different in design from todays’ modern horizontally opposed engines found in most small single engine aircraft.  They are typically made by either Teledyne Continental or Lycoming.

The radial engine became popular in the 1920’s, with two engine manufacturer’s, Wright and Pratt & Whitney, both designing and producing many radial engines. Most WWII era aircraft had radial engines, which were able to produce the necessary horsepower demanded by military aircraft in WWII.

When I was in Alaska, in the early 1990’s, I had the opportunity to fly the Civil Air Patrol’s DHC-2 de Havilland Beaver, which has a Pratt & Whitney R-985 engine, producing 400Hp. It is quite different in operation from the other air-cooled piston engines that I have operated. Radial engines have a more involved starting procedure, take longer to warm up after starting, and are less tolerate of sudden power changes. Also, because of the large ‘frontal area’ of the radial engine, the cowling is much larger to contain the cylinders, thus there is much more drag.Click here to add your own text