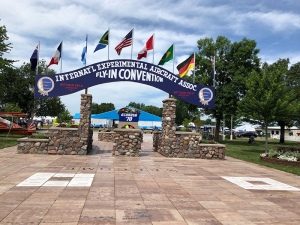 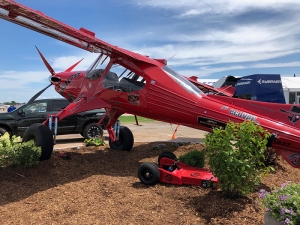 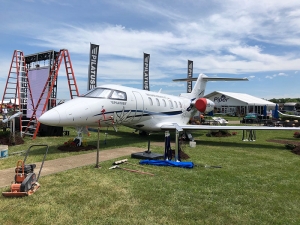 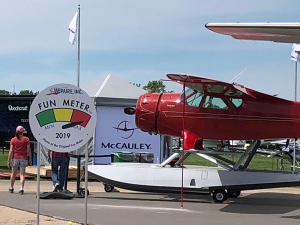 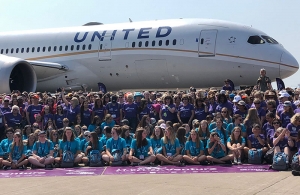 Scroll through media gallery to see some images, click to see details.

The official numbers from EAA as posted on Twitter – Attendance: 642,000!! This is an increase of 6.8% over last year. This includes 2,772 international visitors and 12,300 campsites.  There were more than 5,500 volunteers, including myself as I volunteered for two organizations, SAFE and FAN. There were more than 1,500 forums and workshops! Who had the time for forums and workshops with all that was going on??  Also, there were 863 exhibitors, and over 10,000 aircraft flew into OSH and other airports in east-central Wisconsin. There were 2,758 show planes and 127 takeoffs and landings per hour! Someone actually counted all of this. What a week!!

Oshkosh/AirVenture is SO busy (during this week only) that air traffic controllers from around the US actually ‘bid’ or request to work the ‘air traffic’ at OSH…as it is called. They all wear distinctive pink T- shirts that say, “Oshkosh Tower’. It’s the challenge to them of ‘working’ this diverse mix of many aircraft types, creating an orderly flow, arriving and departing, or staying in the ‘traffic pattern on their fly-bys’,  ranging from supersonic military tactical fighter jets to, at the other end, decades old vintage aircraft lumbering along, and some ultra-lights as well.

As for myself, this year, I flew into Oshkosh with a friend/client from work who owns a Citation I, and he brought 5 of us along with. At no cost. He is a very generous guy and he covered the cost of fuel. Due to the limited range on his Citation, with six of us onboard, we took off from John Wayne Airport in Orange County, CA and stopped for fuel and lunch in Centennial Airport in Denver, CO (KAPA). Then, with summer time thunderstorms headed in our direction, we had a quick lunch while the jet was being refueled and quickly departed for Oshkosh.

There is a 29 page ‘NOTAM’ that spells out the arrival and departure procedures for the various aircraft types flying into/out of Oshkosh each year. It is required reading. However, this year, with all of the weather-related delays and cancellations, by the time we arrived in the vicinity of Oshkosh, the NOTAM was not in effect. Milwaukee (TRACON) Approach instead vectored us for the RNAV 27 Approach to KOSH and it seemed like we were the only ones on the approach.

Instead of the typical beehive of activity, there was almost no activity. But the thunderstorms that had moved through the area earlier in the day, causing havoc, had moved through. Most inbound aircraft were being held on the ground at one of many surrounding airports by KOSH ATC and were waiting for conditions to improve. It took several days for this to happen as the weather cleared up and the grounds finally dried out.

I was a busy guy from Sunday until Friday afternoon when I left. So much to see and do, and pictures to take. The health app on my iPhone tells me that I walked total of 96,949 steps from Sunday through Friday, averaging about 5 miles a day! But in spite of all of this, I felt fine and had plenty of energy. Also, I wear arch supports in my shoes, so I don’t have sore, tired feet at the end of the day!

So much to see and do…exhibits (four large permanent exhibit halls), display aircraft, fly-bys ongoing every day, not to mention forums…and workshops. Oh, did I mention the world-class museum, and the temporary seaplane base? And the daily airshow, starting at 3pm. Plus, two-night airshows during the week. You simply can’t see it all. You just take in what you can! I see many colleagues here once a year, and we attempt to catch up…and I get to connect with many in the industry that I would not be able to see, otherwise. And I love to see whatever is new each year, which is exciting as there are many working on new and emerging technologies.

Mental toughness and how it applies to aviation