Palm Springs, California. Under partly cloudy skies on Friday morning, October 15, 2015, I attended the 2nd annual Flying Magazine Expo. While it was ok overall, the attendance seemed smaller this year, and the number of exhibitors was down, as well. There were fewer than 100 exhibitors. Some of the biggest players in the industry were not there, including Textron (Beechcraft/Cessna), King Schools, and Piper, to name three. 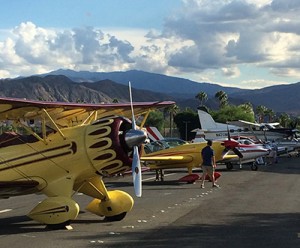 The speaker line-up was generally good, but again some of the big names in the business were not there. In the morning I attended two, one-hour seminars. Both were excellent. The first addressed ‘The Fundamentals of Flight Control Maximum Confidence/Minimum Workload”, which was all about basic flying skills (pitch & power) and aircraft control. The second was “iPad Basics”, and covered the gamut of the many operational considerations when using an iPad. In the afternoon, I attended a one-hour presentation on thunderstorm hazards, presented by a meteorologist from Jeppesen, which was very interesting.

Checking out the aircraft on display outside the convention center, there seemed to be fewer on display this year. Of course, with Textron being absent, Beechcraft and Cessna were not there displaying any aircraft.

This event is really a ‘mini’ expo, and runs Thursday through Saturday afternoon. It is a regional affair. Many of the exhibitors have a smaller display for this show, as a result. It was worth attending, for one day, for myself, but not for all of it. I will have to see what happens with this next year, before deciding whether to attend again.

Weather Accidents and How To Avoid Them
Scroll to top