From Learjet to Cessna 150 In The Same Day

I don’t know if any of you have been to south east Utah. It’s beautifully rugged mountainous terrain. For John Lindgren & I it was not a relaxing drive. But I did take some pictures. We were in a hurry to get to Moab, Canyonlands Airport (KCNY) to get the Lear fixed and ready before the passengers showed up.

We made one stop for gas for the rental car, and I seized the opportunity to get a Subway sandwich from the store that was part of the gas station. If I had not done that, I would not have had a chance to get a bite. It was one of those days! It was really a high stress day with all that was involved. But just part of the deal. After 3 1/2 hours or so we arrived and quickly got to work. Found the mechanic and replaced the faulty igniter. Finally got the jet ready. Then we were notified that the passengers were late. Oh well. Nothing we could do.

My concern; I’m planning to fly myself back to Long Beach in my Cessna 150, if we aren’t too late getting back to Sacramento. Otherwise, I spend the night somewhere. I’m not pushing it! It’s two, two-hour legs for me with a fuel stop. About 4 hours. Four hundred miles total. Hopefully the weather holds, and Long Beach (KLGB) does not go IFR with the marine layer before I arrive. Keeping my fingers crossed.

The passengers finally arrived, and we quickly got under way. Started up and taxied out. It’s a non-towered airport, and the weather was CAVU so there were no delays departing. We took off and climbed….and turned right and headed west. Due the COVID-19 situation, the Salt Lake Center (ZSL) was really understaffed, and the controller was extremely busy, working both high and low altitude sectors. It took us almost 10 minutes to check in on the frequency after takeoff, and pick up our IFR back because we could not get a word in. Literally. You’d think we were in New York Approach Control airspace! 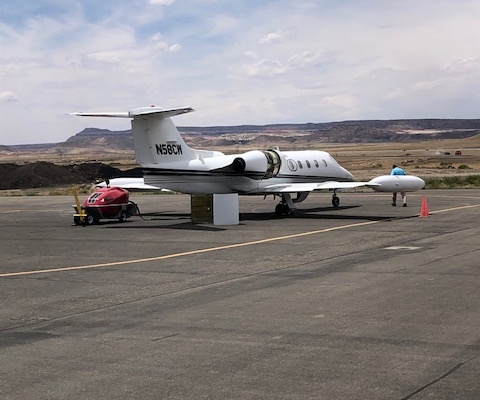 We were able to climb in increments, ‘step-climbing’, as it’s called, until we finally ended up at 40,000’. This is a typical cruise altitude for a Learjet. Ground speed over 460 knots, more than 500 miles per hour. I saw Lake Tahoe for the first time in years on the way back. It was a 90-minute flight. Very nice. John flew and I handled the radio communications with ATC. Typical.

The pilot I’m flying with is a retired airline captain. He was a Training Captain (instructor) with a foreign flag carrier, with extensive international experience, naturally, and a former military fighter pilot as well. Very knowledgeable. I’m learning lots in a very fast paced environment. He’s demanding but polite. Discussing many technicalities and regulatory issue on the way, as appropriate. We get along

After landing at McClellan Airport in Sacramento, shortly after parking, the passengers got off, and I gave John my invoice for my ‘pilot services’ which is what ‘contract’ flying is called. and I get myself organized and mentally shift gears back to flying my Cessna 150. Much Lower and much slower. What a change, after a Learjet!!

I make a requisite pit stop, pay for my fuel, get my overnight bag that we had left there earlier in the morning, then go preflight my 150.  Then start up and taxi out. All in a timely manner. Not rushed but timely. I take off and head southeast…towards Fresno for a fuel stop. I landed at Fresno Chandler Executive (KFCH), not Fresno Air Terminal (KFAT), the air carrier airport. It’s smaller and easier to get in and out of. I’m there in about 2 hours. It’s self-service. Easy enough. Until I run into a problem with my credit card. Hmmm. No time for this! Try another card that works. Ok. Add 12 gallons. I’m off to Long Beach. I want to get through the Gorman Pass, before sunset.

Takeoff and turn left, southeast and climb. Call ATC (Fresno Approach) for ‘flight following’. Watching the clock, checking the weather at KLAX and Long Beach on my iPad. And the Dawn/Dusk app on my iPhone. What time is sunset? Ahead, south of Bakersfield, are 8,000’ mountains. They are at the south end of the San Joaquin Valley. I need to climb up to 9,500’ to cross them comfortably with altitude to spare, hopefully minimizing any encounters with turbulence.

I don’t fly over the mountains at night in single engine airplanes! During the daytime, only, weather permitting! IF I have problems, during the day, I can find a place to land. At night, In the dark, you can’t see. Not good. I don’t do this. Neither do most pilots I know.

My little 150 climbs slowly…it’s only 100 Hp at Sea Level. I step climb and finally get up there! It takes time. I plan accordingly. It’s a fairly smooth ride over the terrain. It’s still daylight! I’ll be in Long Beach in an hour! After I’m safely past the mountains, I start down and eventually fly over KLAX using the Special Flight Rules VFR ‘route’ at 3,500’. LAX is very quiet these days. Once past LAX, I turn towards Long Beach. I can see the evening’ marine layer, a stratus cloud layer moving in, approaching the airport. Oh no! DARN. I’m hoping to avoid that!! Ugh. But KLGB is still reporting VFR. Good!

Fortunately, it’s slow moving…and I can ‘beat it’ and land straight in on 8L before it arrives. So, my very long day is almost over. Got up at 3:30am!  I land at 19:52 and have the airplane parked by 19:54. Yes, I keep track of my ‘times’, using the 24-hour format, an old airline habit. Out/Off/On/In. I write ‘em down on my pad of paper. That way I know what I’ve done for my logbook. An old habit that has served me well.

And it’s still not sunset!! What a day!! And I’m not worn out. Still going strong, plenty of energy! Thank goodness Take care of parking and tying down and securing the airplane, putting things away, then drive home. And dinner….