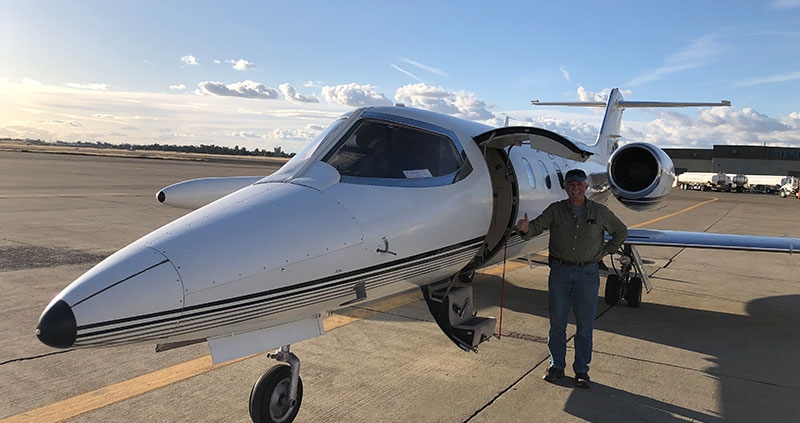 On Tuesday, May 12, 2020, I drove 6 ½ hours north from Long Beach, up through the San Joaquin Valley to Sacramento, California, for the opportunity to fly a Lear 35 and earn my Learjet SIC Type Rating! I have been wanting to fly a Learjet for a long time, going back to when I started flying, 42 years ago. This has been a dream for decades! I simply never had the opportunity.

I have always admired the sleek design of the Lear, with its’ long pointy nose and the tip tanks, for fuel. And, Learjet performance is legendary! I’ve not seen anything climb like a Lear, when it points skyward after takeoff, except for military tactical aircraft. The initial climb rate is typically more than 5,000’ feet per minute, or higher! Just incredible! 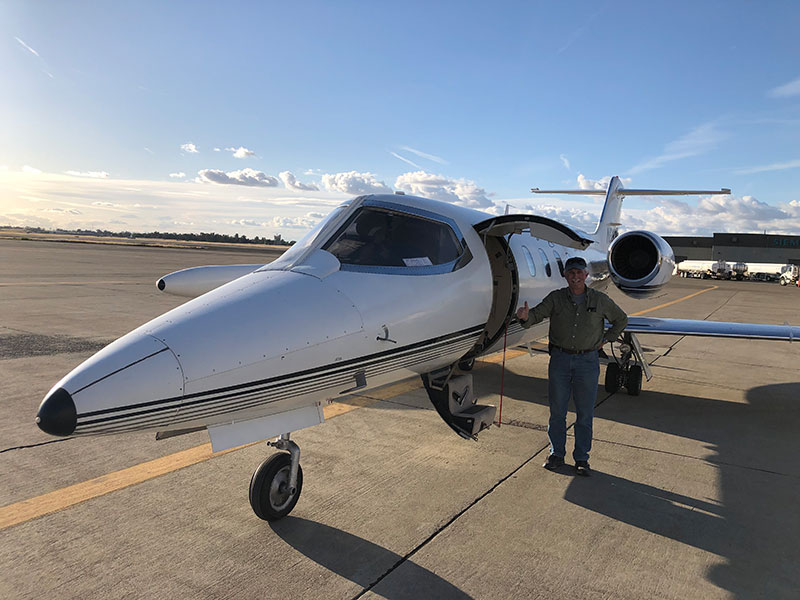 I was able to arrange this through a client whom I had met and worked with at work, last fall. Ironically, I recently lost my job. And now, two weeks later, the opportunity was here! The irony of the timing did not escape me. My client, John, flies this privately-owned Lear 35A, for an individual. He was able to arrange for this short training flight. So, shortly after finally arriving at McClennan Airport (KMCC) in Sacramento, at the FBO, at about 6:40 pm, I met John. We chatted briefly, then headed straight for the airplane.

There was a very brief explanation of what we’d be doing, but nothing like the simulator briefings I am used to, which could take an hour. When we got to the airplane, John explained how to carefully step up and into the cockpit, where to put my feet, getting into the co-pilot seat, because it is a very small cockpit. He also directed me to remove my iPhone holster from my belt. It could be a distraction. No time for pictures on this flight. That would be later.

Once situated, John had me run the Before Start Checklist, and then he started engines, explaining as he went. This was my first time in a Learjet cockpit. After engine start, we taxied to runway 16 Left for takeoff, announcing our position on the Unicom. Interestingly, KMCC is not a tower-controlled airport, even though there is a control tower, but it was not in operation. I was quite surprised to hear that. But there was very little traffic, probably because it was early in the evening, approaching 7pm.

As we approached runway 16 Left for takeoff, John properly briefed me on what to expect. It was the usual, ‘standard’ pilots before takeoff ‘briefing’. IF the engine fails, etc. He also explained that he would make the first take off, so I could watch.

That was a smart move. When you add power in a Lear, things begin to happen FAST!! As he moved the thrust levers forward, the engines spooled up, and he held the brakes. Finally, at a reduced takeoff power, he released the brakes and the jet immediately surged forward down the runway, accelerating and pushing me back in my seat! In what was seemingly only seconds later, I called ‘V1’ and ‘rotate’, and he pulled back on the yoke, pitching up to 9 and then 15 degrees and we were airborne and CLIMBING!! The VSI kept increasing until it was showing about 8,500’ feet per minute on my side. Closer to 10,000’ feet per minute on his side. That’s climbing 2 miles a minute!! And, we were accelerating through 200 knots in the climb! Awesome!!

He ‘gave’ me the controls during the climb, and I put both hands on the yoke.  It has a very SOLID, firm feel to it!! It felt completely natural. We continued climbing and I was very much aware of the hands on the altimeter winding up like a clock! I’ve seldom seen an altimeter increase so quickly. Finally, as we passed through 9,000’, I began to smoothly pull the thrust levers back and apply considerable forward pressure on the yoke, and we leveled off at about 10,000’, and our speed was close to 250 knots, the speed limit from the surface up to 10,000’.

I was not yet used to the ‘feel’ of the Lear, so I was not able to fly it as precisely as I would have liked. The flight controls on the Lear are mechanical, cable and pulley. There is no hydraulic assist like on larger jets, so it takes more of an effort to control. This was also a new ‘sight picture’ for me. Looking forward out of the windscreen, it was just different enough that I was working hard to find a good reference point. So, I was not level, but due to my trying to get a feel for it, the altimeter was gently fluctuating, plus and minus 100’ or 200’.

As I recall, one week later, we were skimming the tops of the clouds.

It was really something. The illusion of speed. Finally, he suggested that I try banking left and right, doing shallow and medium banked turns, to get a feel for it. Again, not yet having a good reference point, and looking/scanning both inside and out, I was not as smooth nor precise as I would like to have been. But, for the first time, it was acceptable. I spent several minutes doing this, banking left then right, 30 or 45 degrees, and leveling off, trying to get a feel for the jet. My turns gradually improved.

Then, we turned around, and started our descent back to the airport. This was fun! Pulling the thrust levers back and weaving my way through the layers of clouds as we descended. Soon enough, the airport was back in sight, and John announced our position ‘in the blind’ on the Unicom frequency to any other traffic in the area, and we entered a left base for runway 16 Left.

Again, he flew the first ‘visual’ pattern so I could observe and get a sight picture. He flew a nice, stabilized approach. I was taking lots of mental notes. As we approached the runway, he continued, delaying the flare, I thought, too late, but it was just right for the Lear. Touching down on the mains, he then gently lowered the nose, being careful not to ‘drop it’ on. Then, almost immediately, he changed configuration and added power and we accelerated and took off again, doing a ‘touch-and-go’, and then on climb out, he gave me the controls again!

Now, I really started to work.

Down low, climbing rapidly to pattern altitude, then turning right on the crosswind leg, and now INTO the setting sun!! I was almost blinded, the sun being low on the horizon and in my eyes! And remaining below Sacramento’s Class C Airspace, at 1600’, was a challenge! He admonished me about this several times as we did several takeoffs and landings. The Lear, because it has so much speed and inertia, required me to really PUSH forward on the yoke AND reduce power, to level it off down low and remain BELOW 1600’. The pattern altitude was 1500’ AGL.

John talked me through the pattern each time around. Again, it was challenging. Adjusting the power, watching my pitch and bank attitude, heading, speed, reference to the runway on my right side on downwind, while configuring, I was BUSY!! It was fun, but I was consumed with trying to fly it properly…and precisely…on heading, speed and altitude. Little time to ‘relax’. I had to stay ahead of the jet. Plus, as we configured each time (spoilers as needed, gear and flaps as appropriate), I had more pitch changes to make. Of course, a lot of work. The Lear basically presented a different ‘feel’ so I had to work harder to make it happen correctly. It took much more effort than I was used to.

The Lear is more demanding than the Cessna Citation

The Lear is MUCH more demanding than the Cessna Citation, with the Lear’s swept wing. It took much more of an effort to fly a stabilized final approach, stay on speed, learning when to flare as we approached the runway, then gently lowering the nose onto the runway. And then quickly reconfigure for takeoff. And repeat! We did this several times. He wanted me to get the feel for it and I appreciated this.

And on one landing, we did roll out all the way down the rest of the 10,599’ runway to the end, using all of it. He wanted me to try steering it. This is a challenge, as the Lear’s steering is electrically controlled, both AC and DC electric, and it’s steered through the rudder pedals. Apply pressure to BOTH, and then gentle pressure in the direction you want to go. It is tricky and takes getting used to! He joked that I would be doing ‘S’ turns down the centerline, which I did! Fortunately, I was able to keep it going reasonably straight most of the time. But it was a challenge. So, we taxied all the way back to the runway for one more takeoff.  Finally, it was coming together.

My last takeoff and time around the pattern went much better! I was finally getting a basic feel for it. I was actually ahead of it. I had much better control all around. I held altitude better, my final approach was stabilized, power properly set at ~60% N1, on speed at Vref + 5 (minimum), and I waited just long enough to flare at the right time, and then eased the nose wheel onto the runway.

What an effort! I was relieved, as we rolled out and slowed, then taxied in.  John again took the controls, briefly, then gave it back to me. We’re not done, yet! I carefully taxied in and followed the guide man (marshaller) directing us with his orange signaling wands, on the ramp, directing us where to turn and park. 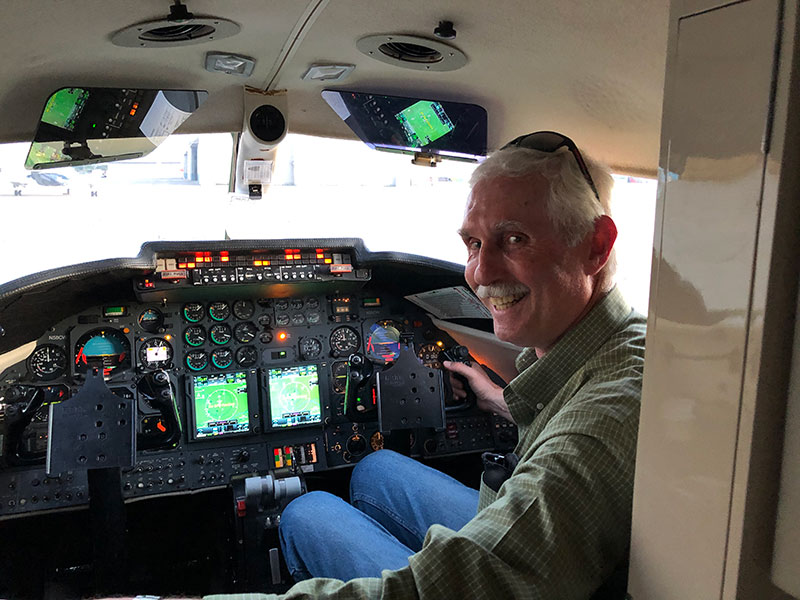 Finally, John set the parking brake and we followed the checklist and shut down. Then we carefully got out. John opened the door. Fresh air!!  I had worked REALLY hard! I was worn out, from a long day already, and my long drive, but we were not finished yet. Fortunately, I am still young enough that I can do this!

We chatted for a few minutes, and then took some more pictures. John then pointed out a few features on the outside of the Lear. Then he ordered fuel, and the fuel truck arrived, and we went inside. I paid for the fuel, but it’s cheap at McClellan and I could afford this. After dinner, we discussed and reviewed the Lear and its systems, for the ‘oral’ portion of this, and he asked me some questions, which I was able to answer.

Finally, we got on my laptop to finish the application for my Learjet SIC Type Rating  using the FAA’s IACRA website. I had filled out an earlier version of the application online and had printed it out and brought it with me. John completed his portion and signed it.

What a day! I felt worn out but quite proud  of my new Learjet SIC Type Rating.  What a tremendous sense of accomplishment!!  I hope to be able to fly as co-pilot for John on some future trips, if and when they come up. Like many things in aviation, and in life, there are no guarantees. I’m looking forward to this!