This year, January 2020, marks 40 years that I have been a flight instructor! When I passed my CFI ‘check-ride’ as it’s called, in January 1980, in Chicago, IL, at Midway Airport, I never would have guessed that I’d still be ‘at it’ as a CFI, some 40 years later! I thought it was just a temporary thing. It was just a way to gain experience to move up the aviation ladder to a flying job! What did I know? I had much to learn! And, I can tell you, 40 years later, I am still learning!

So, over the course of four decades, I have been fortunate to gain wide-ranging experience and log time in a variety of aircraft types (well over 100 makes and models, including seaplanes, ski-planes, ultra-lights, tailwheel, radial engine, Warbirds, gliders, helicopters, jets, turbo-props), in different types of flying ‘operations’, in many locales, both in the ‘lower 48’ contiguous states as well as 4 ½ years flying in Alaska. It’s been quite an education! And it continues.

Why so many aircraft types, you may wonder? Partly because, as an instructor, I have been approached by many pilots over the years seeking instruction in their aircraft. Perhaps it’s been for some ‘required’ training to maintain ‘currency’, per the FAR’s, or to meet their insurance requirements for an aircraft checkout in an airplane that they have just purchased.

So, in the process, I’ve had the opportunity to fly many different aircraft in my capacity as a CFI. Also, I’m curious, by nature. Some aircraft I have intentionally sought out, to get checked out in, to see how they fly, how they handle. And, there are still more aircraft that I want to fly. J I’m not finished, yet! I’m still a student of flying!

Then there’s flying ‘for hire’, as an airline and charter pilot. I have not always been actively teaching. There was a period of time when I had flying jobs and I was simply too busy to do any flight instruction at all. This is all part of the typical progression of a flying ‘career’. I kept my CFI ‘certificate’ ‘current’ but was not actively teaching. The FAA allows for that.

So, I have taught primary and advanced students (proficiency training, IFR, commercial, multi-engine and ATP/Type Rating training) in airplanes and have also taught primary students in gliders. Now I teach pilots to fly jets, using full motion (Level ‘D’) simulators, specifically the Cessna Citation 2 and 5 (CE-500), and what we call ‘differences training’ to several other ‘straight wing’ Citation models. What has been the most challenging? That’s hard to say. It has not been just one thing. It depends.

Some primary students, just learning to fly, have presented big challenges. This is because everyone has their own style of learning. My job as instructor is to figure out what works best for each. Not always easy. They start out either not knowing anything, and thus have much to learn, or sometimes they have their own misconceptions about this or that, which I have to dispel, one ‘myth’ at a time. And some students are very goal-oriented, read and study the material, train regularly, and show up prepared, while others have a more relaxed approach, don’t study much, train occasionally, and then wonder why they are not progressing. All part of the business. I prefer the former, naturally.

Years ago, teaching students to fly gliders was very challenging, since there is of course no engine. It is ‘motorless’ flight. Situation awareness and knowing my proximity to the glider-port was paramount. It is very weather dependent as well. I had to be very careful so as not to let a student ‘get me in trouble’ if a student were to misjudge altitude and distance from the glider airstrip, and we were suddenly too far out to return. Could we get back, or would we have to ‘land out’ in a field? That’s part of glider flying. I had one or two close calls, but always made it back!

The teaching I have enjoyed the most is ‘instrument training’, or IFR (instrument flight rules) training, flying solely by reference to the flight and navigation instruments, in the clouds. It is the training required to become an ‘instrument rated pilot’ and be able to fly ‘IFR’ in the ATC system, the way the airlines do every day. On a personal level, I love the challenge of flying IFR, in the system. J It is a combination of things, for me.

Part is the challenge of IFR flying itself, which by its’ nature is very regulatory and procedural, out of necessity. It’s very disciplined. It also involves lots of numbers, but, it’s not math like algebra or anything like that, which ironically, I was not good at, anyway. It’s different. It’s ‘knowing the numbers’; for example, aircraft ‘limitations’, magnetic compass ‘headings’ to fly (360 or 090 etc.), ATC frequencies (121.90 or 119.40), altitudes (VFR or IFR), aircraft performance numbers (‘V’ speeds), and more. IFR flying also calls for very precise flying.

I think another reason for this is that I also have a fascination for weather (which is still more numbers, patterns and trends), and when teaching instrument students, the training involves a more in-depth study and analysis of weather, and all that goes with that. It also includes teaching more advanced avionics, which includes autopilots, flight directors, GPS navigation, moving maps, etc.

And now, four decades have passed! Hard to believe. I’ve been doing this for 4-0 years. A milestone. And yet I have to say, in spite of my four decades as an instructor, I am still a pilot first, and an instructor second. I have to be a better than average pilot, able to fly the airplane, or glider proficiently (to the FAA Standards) and have a good understanding of the process, and all that is involved, in order to teach it, well. 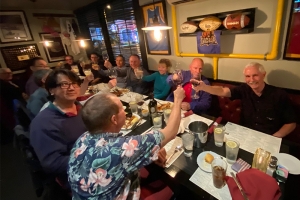 So, on a recent Friday evening, January 31, I coincidently had dinner with a group of pilot friends, that meets weekly on Friday nights, in Orange County, Southern California. It’s a fun group, and the camaraderie is great! There was about 25 of us gathered there this night, at a restaurant in Huntington Beach, California. So, as this particular Friday also marked my 40 years as a CFI. I proposed a toast, and a friend took several pictures. This one I also posted on Facebook and got almost 70 “likes”. A good thing! Cheers to 40 successful years as a CFI, and all of the students that I’ve worked with!!