How long since you’ve done any cross-country flight planning?

Maybe your flying is local in nature, less than 50 miles from your home airport for the $100 burger, so it’s been a while. Well, there are common problems that some pilots encounter with cross-country flight planning, among them, basically; not understanding weather well enough; inadequate fuel planning, and not checking the weather again while en route. Add to this, being overly confident the weather will improve. Overflying fuel stops, and fatigue. And the 180° turnback.

An aviation magazine, “Plane & Pilot”, published a list of common mistakes with cross- country flight planning a while back.

Here they are again:

My approach to cross-country flight planning

I have not flown a long cross-country in many years. Most of my flying in recent years, in my airplane, which has bare-bones avionics, and just a basic ‘6-pack’ for flight instruments, has been limited to local flying in the LA basin, for breakfast or lunch with friends. Always for fun. Seldom was any flight planning required. Just a check of the local weather, TFR’s and NOTAMs, though I would call 1-800-WXBRIEF just to avoid surprises and make sure I covered my bases. I was reluctant to take it a long distance simply because it is not well equipped for that kind of flying. Flight planning for long cross-country flights is different. Of course, it’s more involved, depending how far you go. I’ve done it, but many years ago when flying for an airline. Not recently.

But, after buying my 1970 Cessna 150, almost 2 years ago now, in October 2019, that started to change. Suddenly, I started to branch out and fly to a few more distant places, and then with friends, I was flying farther for lunches, up and down the California coast, from San Diego to Santa Barbara, for example. Then, fast forward to this year. Because of the pandemic, many activities and events had been put on hold. Then, as this year progressed, various organizations started to plan activities and events, including AirVenture, in Oshkosh. With that in mind, I began to think seriously about flying my 150 back to Oshkosh and AirVenture!

This was a BIG step for me! I had never considered this before. But I had flown enough cross-country flights to enough places in Southern California, that my confidence had grown to where flying back to Oshkosh was doable!! So, with that in mind, I started planning.

So, how to approach this? My approach? Carefully, and conservatively. I’m flying a Cessna 150, which has very limited capability. Basically, low and slow with limited range/endurance. It’s just a two-seat trainer. First, consider the airplane you are flying, and its’ capabilities. How much speed, altitude capability (turbo-charged?), and what kind of range/endurance does it have? And what is your comfort level? Seriously. How long can your bladder comfortably last? 2 hours, more or less? Depends how much coffee or water you drink.

For the 150, with about a 95-knot cruise speed, and a 22.5-gallon usable fuel capacity (~5 gal/hour), it is limited to about a 2 hour/200-mile range, give or take. And then depending on the winds, headwinds, or tailwinds, that will obviously make a BIG difference. And, in a smaller, slower airplane like a Cessna 150, headwinds or tailwinds will make more of a difference.

I don’t want to push it. The general rule of flight planning: land with at least 1 hour of fuel onboard. The FAA only requires 30 minutes for Day VFR, 45 minutes for night VFR. Ref. FAR 91.151, VFR fuel requirements. Remember, these are minimums! Again, FAA regulations are minimums. You want to exceed these. So, plan to arrive with at LEAST 1 hour of fuel on board. You will think much better with adequate fuel reserves, and you will have more options available to you if you land with more reserve fuel. That’s always a good thing!

Also, very important for this kind of flying, especially in the summertime when afternoon thunderstorms are likely, is to leave early in the morning, at daybreak, if possible (weather permitting), well before the heat of the day and convective activity, and then plan to be on the ground by mid-day, somewhere, before the afternoon thunderstorms begin.

For flight planning, I primarily used ForeFlight (FF). And for this trip back to Oshkosh, I also purchased paper charts/Sectionals (yes, you can still get them), covering the expected route of flight, as a backup. I also used the website, www.airnav.com, which is a great resource, for checking FBO’s, and local fuel prices, and can also be used to check lodging for an overnight stop.  And I also used the www.1800wxbrief.com website. So, generally speaking, I would use FF and open the flight-planning window at the top, then input my 150 and start inserting airport identifiers and navigational fixes in the flight-planning box. FF then tells me the distance, time and fuel required for each leg. So, it’s easy to see how long a given flight will take. I would plan conservatively, limiting each leg to about 1 ½ – 2 hours, or less depending on the availability of airports with fuel and services.

And I actually decided to use social media for this as well. I posted the question on a Facebook airplane group: what route(s) do you recommend from the LA basin across AZ and NM on the way to AirVenture? And the answers I got were, basically from the Phoenix area, head southeast and then follow the 10 freeway across southern AZ and NM and then head north to Albuquerque, and from there It’s east to Texas, then north and east across the plain’s states of Oklahoma, Kansas, Nebraska, and Iowa to Wisconsin. Good information!

With that in mind, I worked out a tentative flight plan, with as many as 15 or 16 ‘legs’, that would take about 3 days, depending on the weather. I tentatively planned on 4, 2 hours legs each day, including fuel stops. I would be waiting out any bad weather in my 150, safely on the ground. I also watched the weather very closely, and decided to plan a northerly route also, just in case. 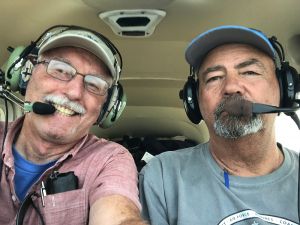 Then, as luck would have it, and as I have mentioned in a previous blog post, my 150 suddenly developed a bad cylinder (#3), and was grounded, and could not be repaired in time. So, I reached out to another pilot friend who was also planning to fly to AirVenture. He readily agreed to have me fly with him. I simply modified my flight plan for a Cessna 170 performance numbers instead, which is slightly faster, and has twice the fuel capacity. It worked out well. We decided on flying 90-minute legs, and then we stopped for fuel, food and a pit stop, as needed.

And because I had not flown this route before, I would self-brief using my iPad and ForeFlight, and would then back that up with a call to Leidos (1-800-992-7433), and talk to the weather briefer, to see what they could tell me. The idea being to avoid surprises!

We kind of followed the plan I had made, except that instead of going south and following the 10 freeway, we took a more northerly route, following US 40 instead, over northern AZ, and NM, before reaching Albuquerque, NM, (KAEG) then onto Santa Fe (KSAF) for lunch. Then we headed east, stopping in Tucumcari, NM, (KTCC) on the way to Amarillo, TX (KTDW) for the night. Then it was north and east across the plain’s states, stopping at Liberal (KLBL) and then Hays, KS, (KHYS) then Lincoln, NE, (KLNK) and then east across Iowa. It took us 2 days to get to Clinton, IA, (KCWI) and the Cessna 150 fly-in. We had a short but fun 1 ½ days there, and then a short flight northeast to Juneau/Dodge County, WI (KUNU) for the mass arrival into Oshkosh on Saturday. 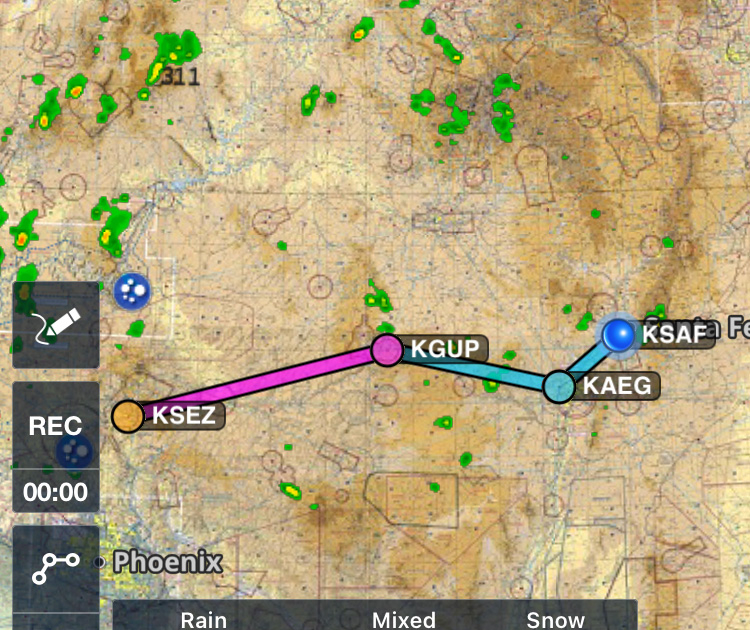 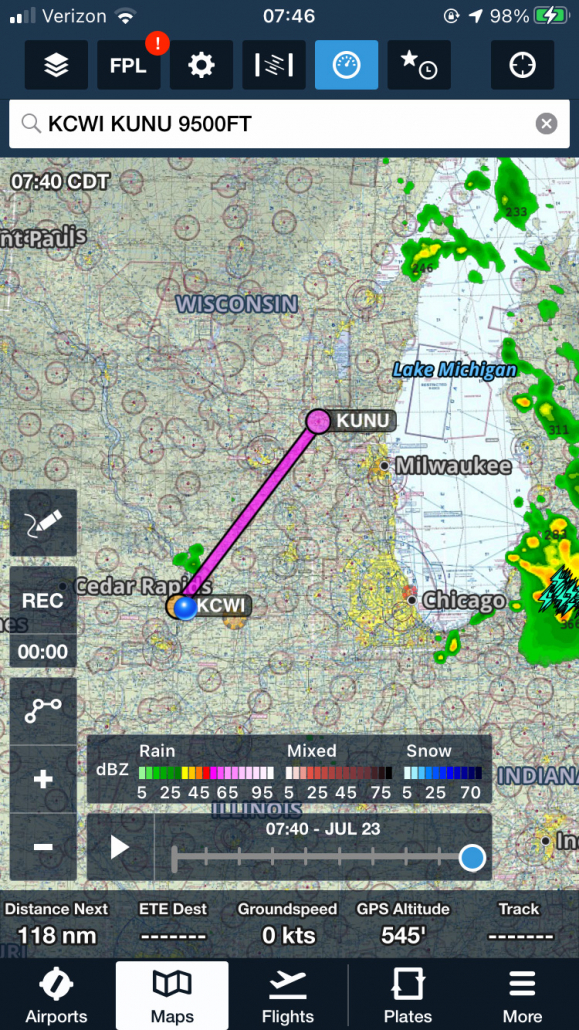 On the return trip, due to frontal activity, and thunderstorms to the south of Oshkosh, we decided to delay our departure by one day. So, we left on a Sunday morning. The weather had improved considerably by then. After taking off from Oshkosh, we flew about 45 minutes to the small town of Portage, WI, (C47) and landed there for a quick fuel stop. Then onto Des Moines, IA (KDSM) for fuel and lunch, then onto Manhattan, KS, (KMHK) for the night. The next day we left early and pressed onto Dodge City, KS, (KDDC) then to Dalhart, TX, (KDHT) for lunch, and fuel, then onto Santa Fe, NM (KSAF) for the night. Finally, the 3rd day, we departed Santa Fe, early, then onto Gallup, NM, (KGUP) for fuel, Flagstaff, AZ (KFLG) for fuel, then Lake Havasu, AZ, (KHII) where it was a sultry 109°, for lunch, then Twenty-Nine Palms (KTNP) for fuel, and finally, El Monte, CA, (KEMT) and home!

What a trip! Lots of fun, lessons learned, seeing small town America at each stop. It was fascinating to me as well as I watched the terrain changing below us on our way south and west across the country. You don’t see this when you’re in the flight levels on the airlines. I still enjoy this!

Any questions or comments on any of this? Reach me at johnmahanycfi@gmail.com