I recently had the experience of working on my Cessna 150. It was fun to get out my wrenches and do some airplane maintenance on this vintage airplane. Let me tell you how this happened. About two weeks ago, I had flown my Cessna 150 to nearby Torrance Airport, KTOA, on Sunday, June 27, for what is called ‘Display Day’, to get an exemption from the yearly property tax on vintage aircraft in Los Angeles County, which my airplane qualifies for. Wanting to take advantage of this, I made the short 10-minute flight to KTOA and parked my airplane in the display area. I found the appropriate folks taking care of this, then got the required sign-off on my paperwork. 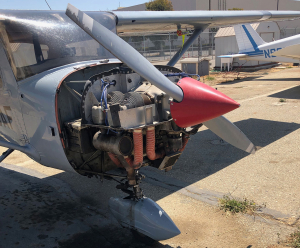 The next day, I was going to fly to nearby Corona Airport, KAJO, about 40 miles east of Long Beach, which is close to where an aircraft supply business, Aircraft Spruce is also located. The plan, fly out and pick up some supplies I had ordered, instead of driving. Simple enough. Except that after starting my Cessna 150, 7KY, it just ran rough. Very rough! Strange. It was fine yesterday. Now, today, this? I suddenly realized I was not flying anywhere. Stuff happens, but this was strange. I pulled the mixture knob out to cutoff (yes, old technology) and shut it down, and then just sat there for a minute. Replaying what I had just done in my mind. Hmm. What could be wrong? I don’t know. Let’s try this again. So, I went through the starting process, and it was Deja vu. Same thing. Hmm. Trying to trouble-shoot, Is this a fuel problem or an ignition problem? It’s starting, so it’s not ignition, but its running rough. The engine RPMs are fluctuating wildly. A fuel problem? Or something else? Pull the mixture and shut down again. Give it a minute. Try one more time. Same thing. Shut it down. What is going on?? I’m stumped.

So, after initially fumbling a bit, I looked through my small collection of tools, that have, up until now, mostly just sat there, on a shelf in my shed. I picked out a small stubby Phillips head screwdriver and went to work loosening and removing the fasteners that hold the upper cowling in place. And then lifted it up and removed it, carefully setting it on the ground. Looking at the upper engine compartment, everything seems to be intact, nothing is loose. No obvious signs of trouble. Hmm. Ok. Put the top cowling back on and reinstall the fasteners.

Get out and drive down the flight line. Is anyone else around that could help? Usually someone is around. Not today, right now. Monday mid-morning. Darn. Ok, I text my mechanic, Hunter, who is temporarily out of action with a back problem. I explain my situation. He replied, suggested a few things, including a fouled plug. Spark plugs. Carbon deposits. I always pull the mixture and lean it out on the ground. Ok, assessing the situation, and aware of the time, I had spent a while on this, and no progress. Time to move on. Close up the airplane and leave.

Fast forward. I’ve told my pilot friends about this. The word is out. Three days later, on Thursday, July 1, a friend has loaned me a few tools for some airplane maintenance. I decide to take on the task of removing the upper cowling and then removing and cleaning the spark plugs, all 8 of them, and then reinstalling them.

No, I have not done this before. But, I tell myself and someone else, jokingly, it’s not ‘rocket science’. I can do this. I’m not intimidated. It’s a matter of learning the procedure, the process, and what’s involved. What tools to use, how things work, etc. Airplane maintenance, mechanical stuff. I can do this.

Now, one more time, get the Phillips Head screwdriver and remove the upper cowling. And then the lower cowling. Removing the fasteners holding it in place, and carefully setting it down on the ground.

Then, one at a time, with the wrenches loaned to me and a ratchet and extension and a spark plug socket, I went to work, carefully removing eight plugs (2 per cylinder on piston airplanes for redundancy, an FAA requirement), and plug wires. The upper plugs were generally easy to remove. The lower plugs required more time and effort. Some were on really tight. Plugs were placed in a special sparkplug tray with numbered ‘holes’, both upper and lower holes for each cylinder, so they go back into the correct cylinder.

Guess what? This is FUN! My young nephew Milo would be proud of his uncle, who has not normally done this. Milo loves tools and machines! But I plan to start doing more work on my airplane, as the opportunity arises. I am seriously enjoying getting my hands dirty, working with the tools, and learning the mechanics of the engine and airplane. YES! I’ve had this ‘itch’ for decades. This is LONG overdue for me, LONG OVERDUE! I am finally getting to do this!! You can’t work on modern cars anymore. They don’t even want you to. Fortunately, with older airplanes, it’s different.

For some perspective on this, this Cessna 150 was built back in 1970. Over fifty years ago! So, it’s really 1960’s technology. Nothing fancy like we see today in cars, and more modern aircraft, like fuel injection for example, where more and more is automated. It’s a simple 4 cylinder, horizontally opposed, air-cooled, carbureted piston-engine. Only 100Hp. And it’s very reliable. It’s perfect for me to learn the basics of engines and airplane maintenance, which is part of the reason that I bought this airplane in October 2019. 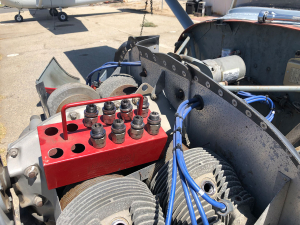 So, after removing the plugs, my friend Kenny and I walked down to where on the flight line we have equipment in a shed, for jobs like this, cleaning the plugs. He carefully cleaned the plugs, one at a time. Then I walked back to the airplane and reinstalled them. This, of course, takes longer. And the bottom/lower plugs are a pain…because of various engine components and accessories that are just ‘in the way’ of the sparkplug ‘holes’ for each. This is all part of working on an engine, airplane maintenance. But still FUN!!

Finally, after a while, they are all installed, though, not properly ‘torqued’ or tightened to FAA specs, for normal operation. I can start the engine, to see if it will run, but I’m not going anywhere. Ok, so I start it up, but, again, no change. Still running rough. Hmm. Ok, shut it down. It’s something else. I’ve done ALL I can. Not sure what’s going on. Learning. It’s a process. Diagnosing engine problems. All told this process of removing, cleaning and then reinstalling the plugs took about two hours. A good investment of my time. Now I know how to do this.

A day later, as the word gets out among friends on the flight line, another friend who is also a mechanic has come down and carefully pulled the propeller ‘through’ several times, checking the cylinders for compression. A good cylinder will require an effort as the propeller is pulled through. A bad cylinder will offer little resistance, because of low or no compression. And, as he expected, and explained to me, it likely has a bad cylinder, and probably a stuck valve, in number 3-cylinder, which is the ‘aircraft’ front right cylinder as seen from the pilot seat. Now we’re getting somewhere. Progress. 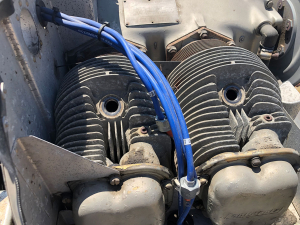 So, the airplane is now considered ‘AOG’ or ‘aircraft on ground’, in other words, grounded. And at this point the required FAA Annual inspection is fast approaching, the next week. So, there’s nothing more I can do. Another friend helped me put the upper and lower cowling back on, and tighten it, so it is ready to be towed over across the airport to where the ‘annual’ inspection will be completed.

Now this week, the annual has been started, and as I write this, it’s Tuesday, July 13. I had a chance to talk with the mechanic, Steve, who is doing the work. He’s really good. The airplane is generally in good condition, but on a 50-year-old airplane, there is always something that needs attention.

He reviewed his list of squawks with me, and then we discussed the engine and number 3 cylinder, the biggest problem. He explained that the exhaust valve is in fact, stuck, and would not move. So, he recommended that he remove the cylinder and send it out to an engine shop that specializes in engine and cylinder overhaul and repair. Of course, I agreed. So, his crew removed the cylinder and sent it off to the engine shop, which is in the area. This will add to the cost of the annual, of course. I’m ready for that. All part of it.

With any luck, it will be fixed and ready in a day or two. Hopefully. If not, my departure for AirVenture and Oshkosh will likely be delayed. A day, maybe two. Just the way it is. I am taking this one step at a time. In the meantime, I am learning more about the mechanics of the airplane, the engine, stuck valves, airplane maintenance and more. It’s all good. Many lessons learned, for me. This is just bad timing.

And it’s all part of aircraft ownership. Fly safely!