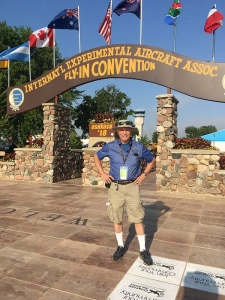 There was lots of cool stuff to see and do. Which is why you should visit AirVenture!

Where to begin? It’s hard to describe ‘AirVenture’! It’s so much more than ‘an airshow’, or a convention. It’s like Disneyland to ‘the max’.  It’s impossible to take it all in, from the range of aircraft on display, to the exhibit hangars, speakers at various forums (over 1,500) and much more. The event planners outdo themselves on this, every year!! And they succeed, every year!

The City of Oshkosh takes in nearly fifty percent of their annual revenues during this one week alone. There are almost 20,000 campers in Camp Scholler. Nearly 10,000 aircraft fly-in and are parked on the grounds. When they run out of room at Wittman Field, then the arriving aircraft end up at one of several other nearby airports in Central Wisconsin.

There is the daily airshow, on top of everything else, at 3pm, daily. Not to be forgotten is the museum, which is a world-class museum, and don’t forget the Seaplane Base, just a few miles southeast of Wittman Field, accessible by bus from the south end of the tie-downs by the approach end of runway 18. The Seaplane base is like another world away from it all, on a much smaller scale. Several float planes are moored there, and if you are there long enough, you are almost sure to be able to see someone takeoff or land from the water lane, which is always a treat! 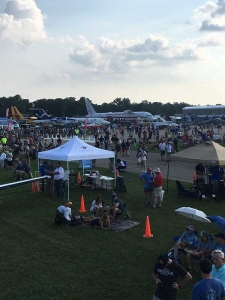 Go to www.airventure.org to get an idea of what all there is to see and do. The ‘AirVenture’ experience is different for everyone. I have been there almost 20 times now, since first going in 1977, and I still have a great time each year! There’s always something new to see and do! It’s never boring … like meeting with fellow aviators from around the world and having a common bond. Where else can you do this?

I am involved in many aviation organizations, and volunteer for two of them during AirVenture. I started doing this a few years ago. It has added so much more, for me. I volunteer for both an aviation education organization, SAFE, as well as an aviation media group, the Florida Aviation Network (FAN), and divide my time up between the two. Because I volunteer with FAN, I now get press credentials and a Media Pass, which allows me access to people and places that might be inaccessible, otherwise. I also take lots of photos for FAN, all of which they post on their website. www.floridaaviationnetwork.com

For the media, there are daily press briefings, where EAA’s Director of Communications, tells us which manufacturer’s and vendors are planning what press-conferences, and media events, each day. Typically, they overlap. You have to pick and choose. Like I said, there is no way to take it all in. To put this in perspective, aviation journalists from around the world attend AirVenture, and more than 1,500 apply for and are granted media passes each year. 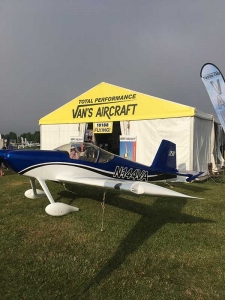 Depending on your interests, here is what to see. From the main entrance, many aircraft manufacturers are located here on the main drag. Then, off of that, are a variety of vendors. And there are the four exhibitor’s hangars. There are probably more than 1,000 exhibitors. Even non-aviation vendors are there. There are also workshops to learn airplane construction. And there is much more.

The main aviation ‘member’ organizations (alphabet groups) are all there, including; ABS, AOPA, EAA, SSA, SPA, SAFE and many others. It’s a great place to meet the ‘right’ people and get your aviation questions answered! If you can find them, in the crowd. AirVenture has gained international recognition. Many manufacturers use AirVenture to make major new product announcements. Even the FAA’s Administrator, and some of the staff, make an annual visit to AirVenture, as well as typically the Secretary of the DOT. This is where they can meet with their constituents. Many important policy decisions are based on informational meetings held behind the scenes at AirVenture, and it gives pilots the chance to meet top government officials in the appropriate forums and ask questions addressing some of the many issues of our time. Both AOPA and EAA have full time staff members in Washington, DC, to work with Congress on legislation affecting us in general aviation.

I try to take in as much as possible and hope to connect with as many colleagues as possible, during the time I am there. There is never enough time. I always leave wishing I had more time and this is why you should visit AirVenture next year! Blue skies.

Mental toughness and how it applies to aviation
Scroll to top