After a yummy breakfast at the Airport Café, with my training Captain and Instructor, Bob, and his brother Tim, both of whom are retired airline captains and are now DC-3 pilots, flying Flabob Express, we went out and inspected the airplane. We did a ‘preflight’ or ‘walkaround’ as we call it. They actually kidded me about my smart decision not to wear a white ‘T’ shirt, (who knew?) under my blue Chambray sport shirt, (I was wearing a grey T shirt) because with all of the oil, grease and grime in and around the wheel wells and the engines, some of it was bound to get on my T shirt. 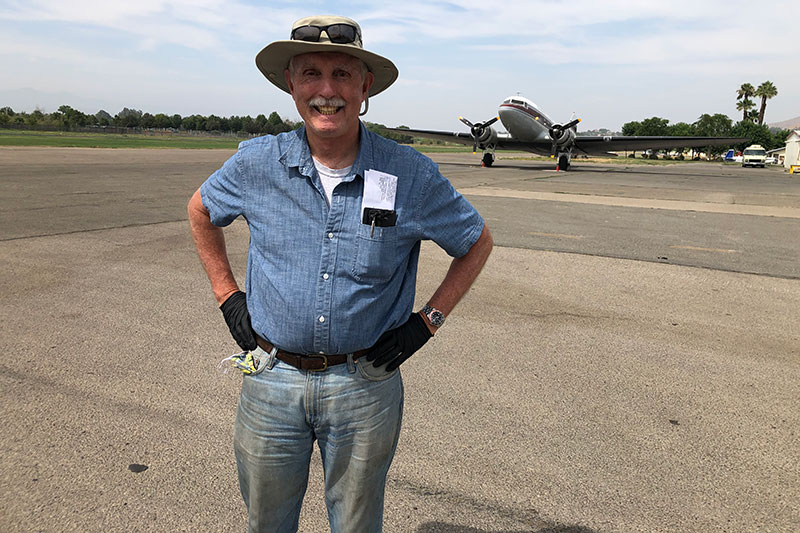 Aircraft with ‘radial’ engines, like the DC-3, are well known for leaking oil, not in flight, but rather on the ground, when parked. It’s just the way radial engines are. There’s usually an empty oil pan below each engine to catch the oil. And the DC-3 holds 29 gallons of oil. Remember, this airplane was designed and built back in the 1930’s. It’s pre-WWII. A much different time. So, a white ‘T’ shirt would quickly get dirty and show all the grease and oil stains! They told me I ‘passed’ the first test, not wearing a white T shirt! Yeah!!

You actually have to duck down and then carefully walk into the wheel wells, where there is a lot of stand-up headroom, and avoid bumping your head ‘ouch!’ on the oil cooler (which is directly in front of the wheel well, and is below the engine, in the slipstream) to accomplish some of the pre-flight tasks.

After this, we went back inside to an air-conditioned conference room and Bob used a PowerPoint presentation about the airplane as a point of reference, to discuss the systems. We also of course discussed flying the DC-3, various power-settings, configurations, how it handled, and how things generally work, for about 2 hours. They had sent me a manual in advance, which I had read through.

The airport we are flying out of is called Flabob Airport (KRIR), and is about 40 miles east of Long Beach, in Riverside, CA, aka the ‘inland empire’ in SoCal. It was renamed ‘Flabob’ Airport in 1943 by Flavio Madariaga and Bob Bogan, so as to avoid any confusion with the other airport in Riverside. The name of the airport was derived by combining the first three letters of their first names.

Flabob is a small airport, with one hard-surfaced runway, 3,200’ long, and is typically not very busy, thus no need for a control tower. It also has a nicely maintained grass runway, which is rare anymore, parallel to the hard-surfaced runway, for use by single engine airplanes if they so desire. Their insurance requires that they have 2 qualified pilots in the pilot’s seats when flying into or out of Flabob.

Since I’m being trained, and am not yet ‘qualified’, I was standing right behind them, in the cockpit, where a small ‘jumpseat’ would normally be, typically for training, or a ‘deadheading’ pilot or FAA Inspector, except that this DC-3 does not have a jumpseat. So I was holding on, watching them, with my headset plugged in so I can hear their communications via the intercom, and know what’s going on. 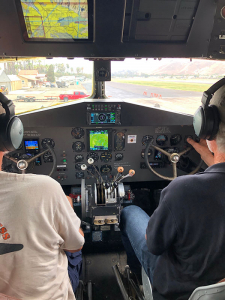 The plan was for us to takeoff out of Flabob, and then, when at a safe altitude, above say, 2,500’ feet, the co-pilot, Tim, and I would change places. Simple. He’d get out of the co-pilot seat and go take a seat back in the cabin, and I’d get in the co-pilot seat…buckle up, and FLY!! We’d then go through all of the required maneuvers, takeoffs and landings, for me to become qualified as a DC-3 co-pilot!

We finally got around to starting engines, and with radial engines, this is quite a busy process! It’s a 2-man (person?) process. This is old technology. Typical of many airliners, on an overhead panel, there are toggle switches for turning various components on/off, and among them are spring-loaded starter switches.

During the process of starting engines, one of the pilots is looking out of the open left or right-side cockpit windows and watching and counting OUTLOUD the propeller blades (1,2,3,4,5,6 etc.) as they pass by the window, so the other pilot can hear him, as the 3 bladed propellers start slowly turning through their arcs.

As your count reaches ‘6’ blades you turn on the primer switch, adding fuel, and shortly after that, at ‘9’ blades, you turn on the magneto switch, to get ‘ignition’, then combustion, and as it starts, then on the center ‘quadrant’, move the mixture lever out of ‘idle cut-off’ to the auto-rich position, and advance the throttle slightly, as needed, and hopefully it starts. Radial engines can be cantankerous. They don’t always start on cue. Then the Pratt & Whitney 1830 (2 rows of 7 cylinders), each capable of producing 1,200Hp, loudly rumbles to life, belching blue exhaust smoke and making quite a ruckus!! Then checking the other engine instruments for proper after-start indications; oil, fuel, hydraulic and vacuum pressures on their respective gauges, and then repeat for the other side.

This can be tricky, as the brakes must be used, but sparingly because they can heat up quickly, and the tail wheel is ‘free-castering’, meaning it can swivel 360°, or it can be locked straight (for takeoff and landing). The wings on a DC-3 are 95’, very long! They are 30’ longer than the fuselage, which is only about 65’ long. With such a wide wingspan, you have to be very careful when maneuvering on the ground to make sure the wingtips are clear of any obstacles.

It took several minutes slowly taxiing down a narrow taxiway to get to the run-up area adjacent to runway 24 at Flabob. After finally completing the run-up, and announcing our intentions on the Unicom frequency, we finally got lined up on the runway.  Bob added power for takeoff, and we were just starting to roll, when the right engine suddenly started to act up. Strangely, it did not develop full power, and the right tachometer (RPM) began fluctuating. This is not good. Hmm. So, Bob, who was in the left seat, immediately pulled the throttles back to idle and applied the brakes, and ‘rejected’ the takeoff. It was the only thing to do. No time for analysis. Just ‘abort’ the takeoff.

Just like airline ‘standard operating procedures/SOP’s’. We then taxied the remaining length of the runway, turned right, and taxied clear of the runway, and then turned right again, onto another taxiway, and then shut down, and secured the aircraft. A small ground crew came out to meet us, including the mechanic. And much discussion ensued.

We were of course surprised, because we had no reason to expect anything, but we had ‘briefed’ or discussed this possibility beforehand (every takeoff is briefed), and they handled it in a professional manner. We are not sure yet what happened. They will inspect the engine. I will have to return at later date to do the flying…and complete the training.

Of course, I am disappointed that we did not takeoff and I did not get to fly, but from a professional standpoint, I have learned long ago to take these things in stride. ‘Stuff happens’ as we say. Today, it happened, they handled it appropriately, and we go from there. I learned a lot, and I have a much better understanding of the DC-3, and technology from the 1930’s. “it’s all good’, as we say. Lessons learned. Bob and his brother, Tim, were excellent to work with. I’m looking forward to my next training flight in the DC-3!

Do you know the difference between the FAR’s and AC’s?

Turning wrenches on my Cessna 150… fun!
Scroll to top