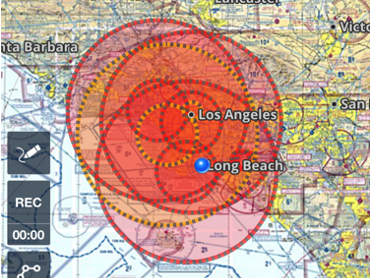 Because of the World Economic Forum Annual Gathering that was held in Los Angeles, June 6 – 10, 2022, the FAA implemented several TFR’s, (temporary flight restrictions), effectively creating ‘no fly zones’ for those of us flying smaller aircraft. 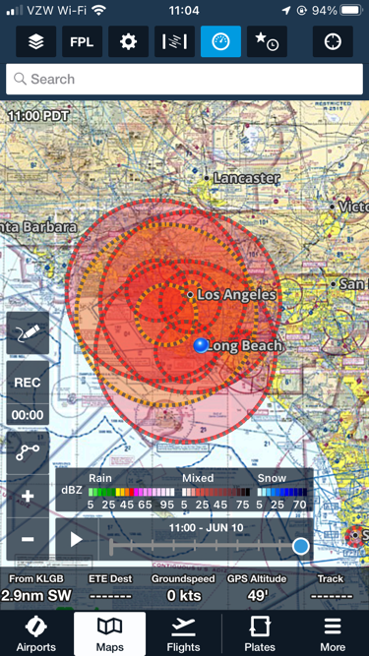 The screenshot shows the many TFR’s,(temporary flight restrictions), ‘no fly zones’ in red circles.

The President, VP, along with many dignitaries and world leaders were attending the Forum. It was a security nightmare, I am sure. Anytime there is an event like this, the DHS (Dept. of Homeland Security) collaborates with the Secret Service and the FAA to create and implement TFR’s, as needed. TFR’s can be implemented for any number of reasons, such as: when there are large forest fires, to keep transient aircraft out of an area to keep it clear for firefighting aircraft dropping water or retardant, also for major sporting events at stadiums, and to provide the required protection for Air Force 1 (AF1) and Air Force 2 (AF2), as a matter of national security. So, both AF1 and AF2, were out here, both at different airports, having brought both the President and the Vice President out here. Coincidently, VP Harris also has a home out here, in Brentwood, CA. She’s a regular visitor to SoCal.

So how does this affect us, as pilots? The inner rings are ‘no fly zones’ unless you are on an IFR flight plan, like the airlines. The outer rings allow some additional operations. The screenshot above from my ForeFlight iPad app, shows the many TFR’s, in red circles, and when you touch the screen on a particular TFR, it will then show the times and dates that each is in effect, along with other pertinent data. In this case, they are centered on LAX. The inner and outer ‘rings’ are circles of different diameters, typically 10, 20 or 30NM (nautical miles), and they may go up to 17,999’, or lower, depending on circumstances. Many smaller general aviation airports in the LA basin are also affected this week. This is the first time I have seen so many TFR’s that overlap like this.

Airline, corporate and military aircraft are not affected. They are on an IFR (instrument) flight plan, and ATC knows what they are doing, where they are going. When a TFR in created, the FAA issues a NOTAM (Notice to Airman), informing ALL pilots.

It’s the typical ‘private pilot’ who is most affected by‘no fly zones’, who doesn’t need to file a flight plan to fly from one airport to the next, in good weather. We are typically flying smaller propeller-driven aircraft. We cannot fly in the outer rings of the TFR unless we are transponder equipped and are in communication with ATC. Additional restrictions may apply.

We have restrictions placed on when and where we can or cannot fly, anyway, staying well clear of busy airline hubs like LAX, and keeping the ‘airspace’ clear, secure, or ‘sterile’ and allowing for arriving and departing jet traffic. As for myself, I am not flying my Cessna 150 this week with all of the TFR’s that are in effect. I’m not taking any chances!

And normally, 99.9% of the time, those of us flying ‘smaller’ general aviation aircraft, are compliant, we follow the rules and stay clear of these areas. We do not want to cause a problem. However, occasionally there is a problem, for whatever reason(s). Things happen. Usually, it’s accidental. When this happens, there are consequences.

Violators can be safely intercepted by the military or law enforcement, in flight, following well established protocols and procedures, and are directed to land. After landing, offending pilots are then apprehended by law enforcement, interrogated, and usually face violations, sometimes fines and possibly suspensions of their certificates, by the FAA, depending on the circumstances. This is serious stuff!

So, avoid TFR’s, check NOTAMs before flight, and fly safely!

Want to join the discussion?
Feel free to contribute!